Spinnaker Contract Manufacturing Inc., a growing EMS in Tilton, New Hampshire, has faced many of the same challenges over the years that other PCB assembly houses have, and have had to address them head-on with flexibility and creative, but robust, solutions. For example, they have recently seen an upturn in demand for quick turns for both production and prototypes. To meet this growing demand effectively, Spinnaker had to build more flexibility into their operation to provide customers with both volume production and quick-turn delivery. And of course, the teams, i.e., receiving, kitting, assembly, QC and shipping, all needed to be faster and completely accurate. Spinnaker met the need for speed and flexibility at the pick and place level, often the throughput ‘bottleneck’ in a high-speed line, installing modular mounters that provided both of these attributes. But how did they get there?

Carlos Ferreira, Spinnaker’s SMT Manager, describes the environment: “Spinnaker started in 1992 with through-hole technology and grew into the SMT business in 1998. We are a medium-sized company but since our start, we have seen more than 20-30% of steady growth every year. The key component has been the steady increase in volume in a business climate that has seen significant highs and lows.” Carlos adds, “Presently we are seeing 20 to 30 jobs per week with a oneshift operation, with most of the PCB assemblies being double-sided. The jobs are a mixture of production, prototype and NPI.”

Guy Nickerson, Spinnaker’s President, describes how his company added capacity to meet the demand for volume and flexibility in the quick-turn requirement of their assembly business. “We began with a Yamaha Emerald pick and place machine; this was followed by the acquisition of a Topaz-X in 2001, and then an Opal-X in 2005. In 2011 we purchased our first YS12,” he continues, “And we have been purchasing a new machine every year as our business has grown. The Yamaha equipment has played a major role in this growth.” The pick and place models carefully chosen by Spinnaker have helped the company build superior products, Nickerson says, which in turn has given the company a competitive advantage.

Spinnaker’s manufacturing engineers found their first pick and place machine, the Emerald, to be reliable and repeatable; as a result, when the need arose to add capacity, Spinnaker stayed with the Yamaha product line.

“Equipment reliability is the most important factor, since it is critical to the survival and growth of a successful business,” Carlos says. “When we were starting out in SMT in 1998, the decision to purchase the Yamaha machine was important because down time was critical at that stage. We also had to deal with the unexpected.” Carlos adds that when starting an EMS business, the ability of the machine to adapt to whatever ‘came through the door’ played a large part in the success of Spinnaker. Since they’d had good results with the Emerald, it made sense to them to purchase again from the same supplier, also taking into account issues of compatibility (feeders, etc.). 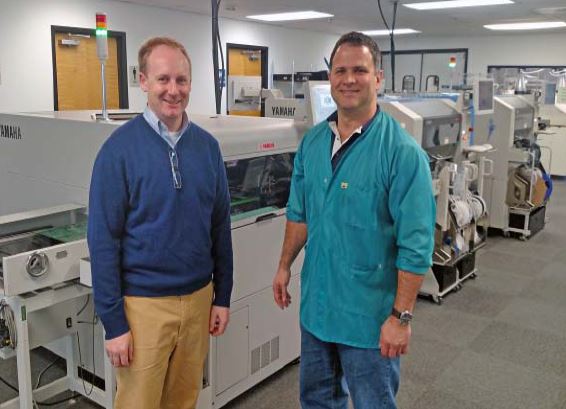 A number of changes by Yamaha in pick and place machine technology since Spinnaker purchased their first machine, the Emerald, have helped Spinnaker keep pace with growing demands as well as improve their process. Most notable of these improvements has been the change from mechanical feeders to electrical feeders, according to Carlos. “When we compared the Yamaha feeders to what else was available on the market, we found the Yamaha feeders to be the best available. They are easy to handle, as well as to load and operate.” Installation of the new feeders had an immediate impact on pick errors, he recalls, with pick rates at or near 100%. “The impact on the production has been a 25% improvement in up-time,” he says. “Additionally, changeover is quick and easy with no wasted components.”

The engineers at Spinnaker knew, from their experience with various vendors, that service and support was critical to making the AOI and inspection process overall a success. They’d had unpleasant experiences previously with AOI system suppliers whose service was poor. Spinnaker requested special software to address issues with specific products, and Yamaha, Carlos recalls, reacted quickly with a working solution. “Yamaha and TransTec Worldwide have been supporting us throughout the entire process, and this has reinforced our decision to purchase the YAMAHA YSiV AOI system. We made the right decision in terms of the equipment and the supplier; the result has been success” (Trans-Tec is a well-established global leader in the sales, distribution and service of SMT equipment for a complete range of products and client industries.)

Familiarity with the software played a key role as well, Carlos adds, since they can take a placement program and convert it into an inspection program quickly. With a few changes, Spinnaker’s engineers can quickly create a program, and this speed and simplicity had a ‘huge’ impact on their throughput, he says. “We saw the similarity in the software, which made teaching the machine a significantly faster process. The YSiV has lived up to the expectations established by the Yamaha equipment that we had already purchased and installed. The machine is doing great, and we have experienced a big reduction in false calls over our previous AOI equipment.”

…Then Followed a Printer

In time, Spinnaker also needed another solder paste stencil printer. Their existing printer wasn’t a YAMAHA, but the YAMAHA YCP10 was one of three printers that they took into consideration. “They all had various differences, but the YCP10 was unique,” Carlos recalls. “The decision came down to focusing on the construction of the printer. You have to look at the mechanics, that is to say, how the machine is built. The YCP10 was built with many similarities to the YAMAHA pick and place machine.

The construction attributes typical of the other machines concerned us in terms of reliability and long-term use. We felt that the YCP10 was built to last, and especially that the software was familiar to us, a real plus. The control of the squeegee angle has had a remarkably positive impact on our print yields. The ability to address the angle to address printing challenges, a unique feature of the YAMAHA printer, has been a great asset.”

“We had a situation where we needed a new line we had a critical customer build ongoing,” recalls Guy Nickerson. “From the time we placed the call, no more than five days later we had a new machine building product. We were impressed by this; Trans Tec and YAMAHA combined to meet our scheduling needs and out-perform the competition with great back-end support.”

Carlos agrees. “Support after the sale is what’s most important. In our experience, all challenges that we have encountered have been resolved quickly. For example, we had to adapt to some odd stencil sizes, and a clamp extension was developed for the YCP10. The ability to change component vendors and types for AOI allowed us to be flexible. As an end user, we always try to work with vendors to help make the equipment better.”

Spinnaker and the EMS Market: The View Ahead

There are bigger obstacles today that are hampering EMS segment start-ups trying to enter the market, according to Guy Nickerson. “Larger EMS companies will continue to struggle with cost controls,” he says. “It is my view that the strongest growth in the next 3-5 years will be in the midsized range of companies. Flexibility and responsiveness will keep work here in the U.S., in part because the trend is to do things faster, better and cheaper. This is what our customer base is expecting. We need to be constantly improving on quality, delivery and costs, even on a daily basis. Yamaha has played a major role in helping Spinnaker meet these goals.”